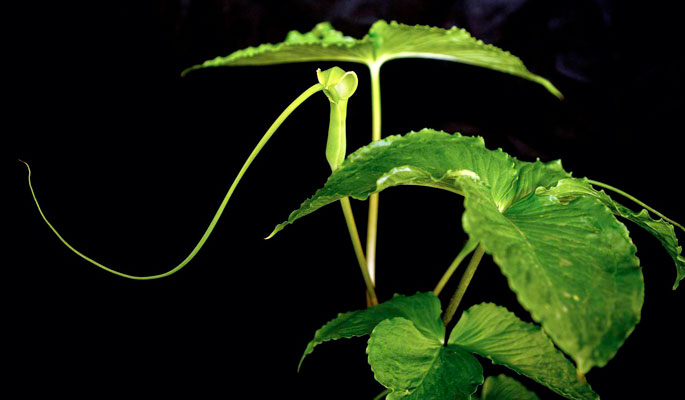 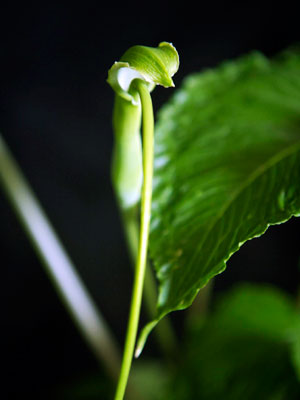 I’m back from Thailand, jetlagged and overwhelmed by the thousands of photos I have yet to process. While I was away, one of my newest plants let loose with an incredible flower, so I thought I’d share.

I purchased this Green Dragon (aka Pinellia tripartita) from Flora Grubb just last month. It’s an Aroid, which means it’s in the Araceae family of plants, including some of my favorites like Philodendron and Alocasia, but I’d never tried a Pinellia before. I can tell already he won’t be my last.

Like other Aroids, Pinellia springs from an underground bulb, or rhizome. When I was transplanting this one, I noticed that the bottom of the pot was dense with baby bulbs, so I planted the main plant outdoors and some of the smaller bulbs in a pot inside. I wanted to see which did better. The answer, for now, is a tie. Both plants are thriving.

Last night, after watering all the plants in the living room, I kept smelling this sweet wet dirt smell. I thought I’d overwatered one of the plants (which happens more than I’d like to admit) and was smelling the water, but I couldn’t find it. Eventually I noticed the Green Dragon bloom, which was the source of the scent, sent to signal bugs to come fertilize it. Perhaps I’m part bug. The bloom is a spathe/spadix combo like other Aroids. But in this case the spathe has a long thin tongue, hence the “Green Dragon” name.

Ofttimes really unusual plants are unusual because they’re difficult to grow, but not in this case. So far, the Green Dragon is an easy, vigorous grower, with beautiful trilobed leaves, an almost neon green color, and supercool blooms. I’ll be on the lookout for more.

Very cool plant – and some nice pictures! I just planted one of my first hardy outdoor Aroids – Arisarum proboscideum (aka Mouse Tails). I’ll post about this one on my blog later this week.

surprise flowers ARE the best! I bought something called the “piss off” plant that smells like skunk last week tiny blue tipped, purple flecked flowers peeped out, it was such a pleasant surprise!

Zach: Thanks! I decided to finally set up a black background (thanks to Rob). I think it helps immensely.

I don’t have this particular aroid. Not even sure if what I think are aroids are actual ones. Your flower has a very interesting form. I think I will keep a look out for this plant

Good to hear you got home safely. I can’t wait to see the pictures of your trip. I will be heading to Thailand next month. Were you able to go to the Chatuchak market during plant day? Any tips will be much appreciated.

Your black backround is perfect!

Superb photos of such an amazing plant! It’s almost as if it’s hissing at me or something. How much light do they get during the day, and what kind of soil? It’s nice to know that you can grow them outdoors too! Beautiful plant indeed!

Rob: Inside, they’re in a west-facing window, so it’s bright indirect. I used my standard plant mix – potting soil with a little extra Perlite – but they seem vigorous enough that they’d probably take anything.

Really interesting plant. Kind of reminds me of a snake with a long whipping tongue! Can’t wait to see your pictures of Thailand!