Word of the Day: Dioecious

In Word of the Day on 11 May 2011 tagged Cycad, Encephalartos, Kew Gardens, London 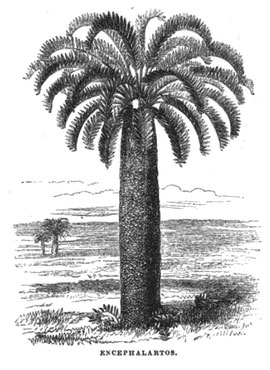 Yesterday when I wrote about Planting Alocasia Berries, I mentioned their flowers (aka inflorescences), have boy parts and girl parts, so they can fertilize themselves. Plants that have both are hermaphrodites, as you might expect. But you might not know the word for plants that don’t: dioecious.

The word “Dioecious” (pronounced die-EESH-us) comes from the Greek for “two households.” Plants that have blooms that only contain boy parts or girl parts, but not both, are dioecious. Humans are dioecious (well, most of the time – I do live in San Francisco, remember), but plants are usually hermaphroditic. So dioecious plants are a minority. (Update: Pines are monoecious. We’ll have to cover that next time.)

I was reminded of this when a friend* sent me this recent NPR story: The Loneliest Plant In The World, which is about a cycad in at Kew Gardens in London. Cycads are ancient palm-like trees. How ancient? Dinosaurs ate them.

The cycad in the story is Encephalartos woodii, and it may just be the last one in the world. And, sadly, it’s dioecious. So when it flowered in 2004, it made a pretty orange cone-shaped flower, but produced no seeds. Unless a female specimen of the species is found, he will be the last of his kind. (Yes, he can be cloned from cuttings, but some things are just better with a partner.)

So the next time you’re feeling lonely, you can count yourself lucky that at least you’re not Encephalartos woodii.

Previously in Word of the Day: Viviparous, Cotyledon, and Monocarpic.

My husband just sent me a link to that NPR story as well and it prompted a discussion where I got to explain plant cloning and asexual propagation to him. So fascinating to learn about this ancient species!

Hollies are dioecious, too … When I worked at a nursery, customers would be very distressed when one or more of their plants didn’t produce red berries. (Only the female hollies produce fruit.)

Of course, there are also monoecious plants — Male & female flowers on the same plant. A lot of trees are monoecious and depend on the wind to pollinate.

I just love this nerdy stuff!

awww, I feel so bad for that poor old tree!
funny you posted this – yesterday I got bored and decided to wiki “angiosperm” to get a better sense of the word – and then learned the diff of monocot and dicot seedlings!
team discovery!

Pines are actually monoecious. It is just that the female cones are located toward the top of the tree and the male cones are lower which reduces the chance of self pollination since the pollen is more likely to blow to neighboring trees rather than straight up. But the male and female parts are on the same tree.

As Jess said Hollies are a good example of dioecious plants where the male and female flowers are on completely separate plants. There are some conifers that are dioecious though. Taxus, Torreya and some Junipers, Cycads are dioecious as is the primitive cone bearing Welwitschia.

I love cycads so I enjoyed this post of yours although I do feel for the E. woodii and its loss of a possible mate. To be worth so much and to be so alone. I didn’t think cliches applied to plants as well.