In How To on 31 May 2011 tagged Flasking, Orchids, Phalaenopsis 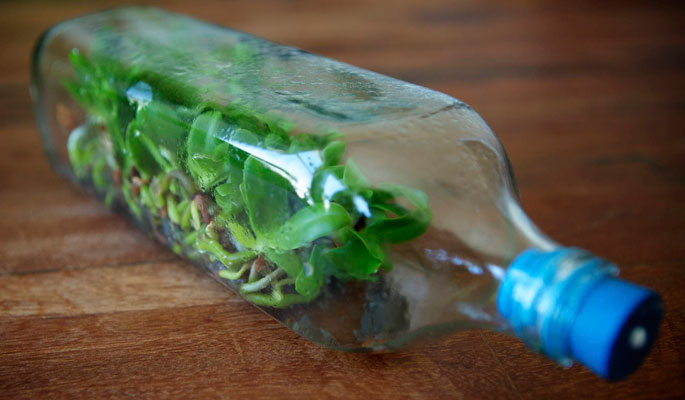 Orchids aren’t like other plants. Their growth requirements can politely be called “fussy.” But that’s nothing compared to how difficult they are to germinate. Growing orchids from seed will be the subject of a post someday, but suffice to say, there’s no way to do it at home without lab equipment, which I’m not crazy enough to buy yet. Fortunately for me, there are people who are, and you can find them on eBay.

Which brings me to “orchid flasks.” One method of growing orchids from seed involves a sterile flask, a growth medium, and injecting the microscopic seeds with a syringe (like I said, lab equipment). The result of which, after a couple years and a replate or two, is an orchid flask – a bottle with dozens of baby orchids growing inside.

The upside of getting your hands on an orchid flask is that you can get dozens of plants for a very low price (usually between $10 and $50 depending on the species, which often works out to be less than a buck per plant). The downside is that they’re years away from flowering, so only do this if you’re in it for the long haul, which apparently I am. Crazy, it turns out, is a matter of degree.

I’ve gone through the process a couple times now. The grower who sold me a flask of Encyclia tampense deflasked them for me, so all I had to do was pot them. The latest was a Phalaenopsis* I got bottle and all. Here’s how I deflasked it.

The orchids will get frequent misting to stay damp, and occasional doses of fungicide to prevent infection, but the rest is up to them. If they’re happy, they’ll grow bigger and eventually graduate out of the mini-greenhouse and into proper orchid media and individual pots. But even in the best case scenario, it’ll be 2-3 years before I ever see a flower. Think about that the next time you see a cheap orchid in a flower shop.

If you want to try it yourself, here’s an eBay search for “orchid flask” to get you started and another walkthrough I found helpful. But be warned – this is not for the casual gardener. I’ll be thrilled if I can keep just one of these guys alive long enough to flower.

* UPDATE: I found a photo of the adult plant and it turns out these guys are not Phalaenopsis at all, they’re probably Hygrochilus parishii, which like bright light and heat, neither of which I have here in San Francisco. Adventure!

Whoa! I had no idea that orchids were available in bottles, that’s crazy.

Would you have any idea what growth medium they use? I have a friend who grows orchids but I don’t recall seeing ones in flasks.

Holy crap. I finally managed to keep a store-bought orchid alive long enough to re-flower and was feeling pretty good about myself … This is definitely a bit ambitious for me at this point, but totally fascinating!

Excellent post!
You’re braver (crazier?) than I am – for the time being… Maybe I’ll tackle this one day.

What species of Phalaenopsis is this? I’m a big fan of Encyclia tampensis. I’m going to try to pick one up when I am down in Florida this fall. Supposedly they are all over the place down there, so hopefully I can find one for a reasonable price.

Wow! That is just amazing! I definitely have a bit more respect for orchids. I really hope they flower for you.

“which I’m not crazy enough to buy yet.”

I think “yet” is the operative word in that statement. He blinded me with science!

Bom: The medium is a whole other science. Each species requires a slightly different medium. All of them are a combo of sugars and agar. Some involve boiling bananas! Here’s one recipe.

Jess: Getting any orchid to bloom again at home is an accomplishment. Congrats!

Zach: I thought these guys were Phalaenopsis, but now I think they’re Hygrochilus parishii.

I’ve been wanting to buy a flask of orchid seedlings but haven’t coughed up the funds yet. This post brings me one step closer though! I love encyclia tampense orchids btw. We have them in florida all the way up to the zone 9a/9b boundary, so I bought some seedlings of my own a couple years back. They’ve grown pretty well, but I’m still a little too protective to try them over a freeze… for now.

Wow! That was so cool. Thanks for the link. I doubt though that I am ready to go through such lengths at this time. That would be quite an accomplishment.