In How To on 15 June 2011 tagged Orchids, Phalaenopsis

The most frequent question I get about orchids is: “Someone gave me an orchid in bloom a couple years ago. It’s still alive, but it hasn’t bloomed again. How do I make it bloom again?”

Orchids bloom when they’re happy, and there are a many elements that contribute to that happiness, including light, moisture, temperature, and season. Let’s assume that most of those things are mostly right for now and get to the root of most orchid unhappiness.

Unlike most of the plants in your house, orchids are epiphytes, which means they grow on trees in nature. There are some terrestrial orchids that grow on the ground, like the much larger Cattleya species, but most orchids given as gifts are the smaller ones, which are usually epiphytic. The most common orchid given as a gift is the Moth Orchid, aka Phalaenopsis, because they’re beautiful and can handle a wide range of environments. 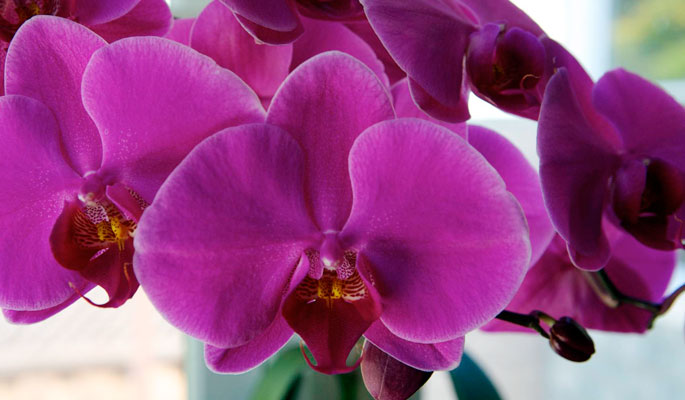 Because Phalaenopsis grow on trees in nature, they’re typically planted in a combination of moss and bark – the kind of stuff their roots look for. But over time, this mixture decomposes and turns into something like dirt. As it does, it holds more water and less air, which is bad for the plant. If the soil mix gets dense and wet enough, the roots will rot.

If the roots rot, then the plant can be starved of nutrients. This leads to a confusing situation where the plant looks thirsty (raisin-like rhizome, wrinkled leaves), which makes you want to water more, but in fact the problem has been too much water. In my experience, this is the number one cause of unhappy household orchids.

If you’ve had an orchid for a couple years and it’s still in the pot it came in, I bet you 20 bucks the roots are rotting. Don’t feel bad! It happens to all of us. The solution is to repot the orchid in fresh media. And don’t worry, it’s easy. Here’s how. 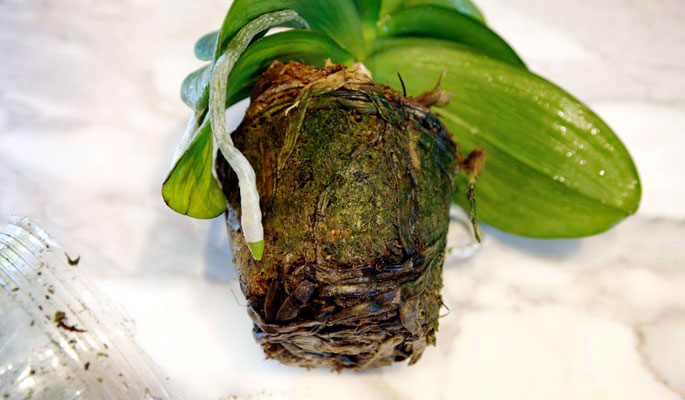 This is a Phalaenopsis I’ve had for a couple years, still in the pot it came in. See that green-tipped root? That’s what a healthy root look like. It’s green and happy because it was outside the pot. The brown mass in the middle is entirely old decomposed mix and rotten roots. 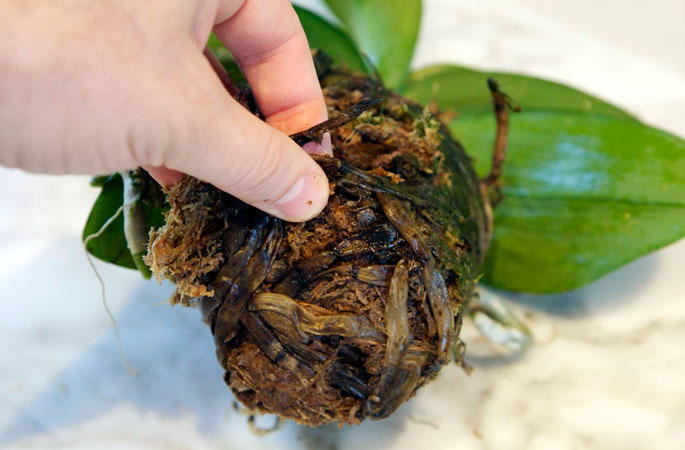 So step 1 is to gently remove all the old media. Take your time here. The worst thing you can do is break off the good roots. 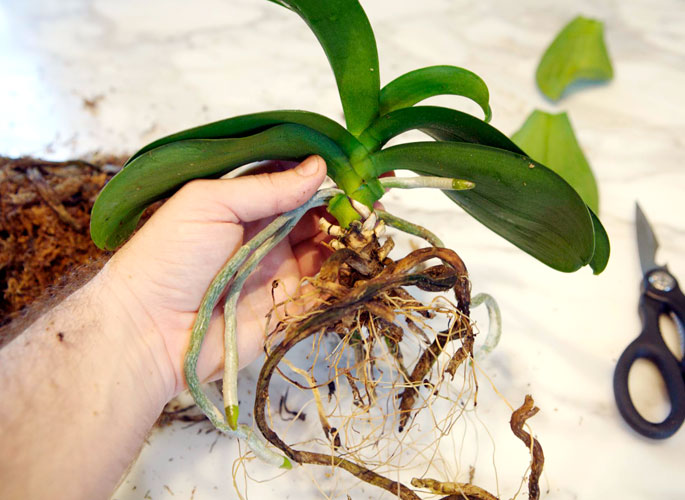 Here you can see I’ve removed all the old media. You can really tell the healthy roots from the dead ones here. You can also see I’ve cut off a couple of the bottom leaves. They were yellow and dying anyway, and removing them will make it easier to get the good roots into the new pot. When you remove media, the brown covering on the dead roots may come off – that’s okay – but leave the thin straw-like inner root attached. They’ll help keep the plant anchored to the new pot. Now’s also a good time to give the plant a good rinse to clean it off.

Now all you have to do is put the clean plant into the new pot and gently pour in the new media. The specifics of what kind of pot and media are up to you. There are a lot of opinions out there, but the only thing that matters is what works for you. Here are the basics.

Pots: Orchid roots need air, so whatever pot you use, make sure it has plenty of holes in it. Plastic pots stay wetter, which is good for a thirsty orchid but can lead to rot. Terra cotta pots will dry out faster, but still need lots of holes around the sides. I usually use clear plastic pots for the smaller plants because it helps me see how the roots are doing, but I have a few of my larger orchids in terra cotta pots because they’re heavy and less prone to tipping over.

Media: Different orchids like different mixes. In general, the thicker the root, the bigger you want the chunks to be. Phalaenopsis have thick roots, so they can use a chunky mix. Thinner-rooted orchids do better in a fine mix. But the most important factor is how you live.

In this case, I used something called a Oxygen Core Dual pot that has two plastic pieces – an inner mesh pot that keeps air around the roots, and an outer solid plastic pot that keeps the humidity in so the mix doesn’t dry out. I also used an orchid mix from the same company that’s specifically designed for Phalaenopsis.

But don’t be intimidated. In the right environment, an orchid will thrive clinging to the bark of a tree with no one looking after it. I’ve had success with orchids is normal pots with whatever orchid mix was cheapest at the hardware store. You don’t have to buy the fancy stuff to grow a happy orchid – you just have to pay attention to what you’ve got.

When you’re done with the repot, give the orchid a good, thorough soak, making sure all the media is very wet. Then leave it alone and let it dry out before watering again. This should inspire the roots to go looking for water and grow into the pot. 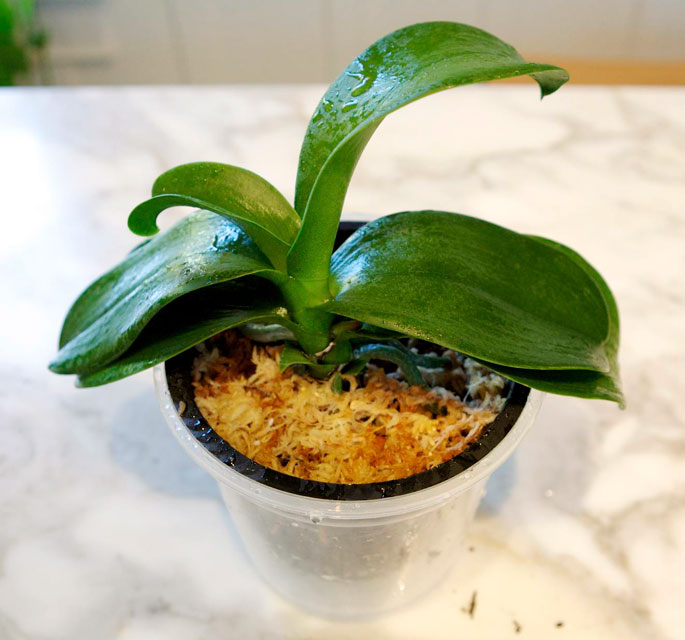 So here’s my repotted Phalaenopsis. Whenever you repot an orchid, it’s a shock to their system, so don’t be surprised if they look a little unhappy for a while. Remember only to repot when the orchid does not have a flower stalk forming – the shock can disrupt the bloom cycle. The best time to repot is right after their bloom cycle is complete.

If this guy is happy, hopefully he’ll reward me with another cluster of amazing pink flowers like at the top of this post next year. I’ll let you know!

Any other orchid questions? Feel free to ask in the comments.

Hi, i have a question, my orchids grown roots on the outside of it’s pot which is quite small. Should I move it to a bigger pot?

Good question, Simone! My Phals do this, too. It’s not bad necessarily, but the roots will die if they dry out for too long. So I use exposed roots as targets when I’m misting.

But if the roots inside the pot have all rotted, the plant could be starving for nutrients. I’d pop it out of the pot and, if all the roots in the pot are dead, repot it as described here in a pot that’s big enough to include the roots that are currently outside the pot.

D, thank you!! I’ve been wanting to ask you these very questions for the longest time. Now I think I’ll give orchids another go (you make it so easy to understand).

Great photos and description of the process – very clear. I’m an avid plantsperson but not really an orchid type. We were given a gift Phal for the holidays and it still has some blooms on it. I’m thinking of taking it into the office (more light, but also more arid) but wondered about transplanting it first. One flower spike is spent and turning yellow, the other still has flowers on the end and is sprouting a new ‘branch’ about midway. The roots look good (clear pot) but the top roots are dried up and no new roots forming (air is too dry?). Suggestions?

Seán – Thanks! Definitely wait until the blooming cycle is finished to move or transplant the orchid. Those things may disrupt its cycle, causing it to drop its flowers.

You should also snip off the flowerless spike. Sometimes, if you’re lucky, it’ll put out another one!

Thanks so much for this tutorial! I’ve always been too afraid to disturb my orchids so they probably have all the problems you mentioned. I’m going to give them some TLC right now!

I wish you’d posted this a year ago — I had an orchid that was perfectly happy until it inexplicably died…I’m sure now it just needed some new fill! I just got a new orchid, hopefully now I know how to fix it next time it gets unhappy! Love this blog (found it on offbeat home) — you’re definitely inspiring me to try my hand at plants!

Thanks for this post! It’s very timely. I bought a little phal orchid at the grocery store a couple of years ago – I admit I’ve never repotted it since, in fact I’ve been a little surprised it’s still alive. I’ve been wondering if it was worth repotting or if it was maybe too late – well, I’ve decided to give it a shot so I just ordered supplies from repotme.com on your recommendation. I hope to see the little guy bloom again someday! (It hasn’t bloomed since I bought it, needless to say. But it’s the longest-lived plant I’ve ever owned, which gives me hope!)