I visited Thailand in April with a group of garden writers. The trip was sponsored by the Tourism Authority, but as they say on NPR, the opinions expressed are those of the author, not the underwriter.

Unlike almost every other place we visited, the Bangkok Night Flower Market is not a tourist destination. This is where the locals buy and sell all the fruit, vegetables, and flowers that would magically appear in our hotel rooms the next day. The paths were narrow and the people move like clockwork. This was a place for commerce, and we were in the way, so the best piece of advice I got was, “don’t stop waking.” 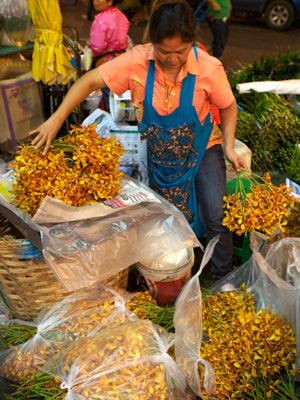 So I walked, shooting from the hip, just trying to take in the scene. The booths were dense and full of flowers and the occasional dozing child. The ornate flower garlands were being constructed in one booth, while the flowers they contained were being sold in another.

There was only one booth that made me stop in my tracks – the orchid booth. Back at home, I meticulously tend to my orchids every day for years, and when one puts out a single spike of flowers, it’s like a national holiday. Honestly, there should be parades.

But here in the Night Flower Market orchid booth, I watched a woman grab handful after handful of beautiful spikes of orchid flowers (I didn’t catch the species) and nonchalantly toss them in bags, toss the bags on the floor, and move on to the next. The pile of orchid blooms was almost as tall as she was.

I stood there in complete slack-jawed amazement until I realized I was blocking the path and messing up the clockwork. So I starting walking again.

Which part of Bangkok is this? This looks completely different from the one I went to last month.

Quite an experience! I can’t imagine ever getting to the point where an orchid bloom was not worth celebrating with a parade!

← Thailand: Suphattra Land Orchard
A Hole in My Park →