We had a bunch of people over for a Fourth of July party this weekend. One of them was Tom, who is four. 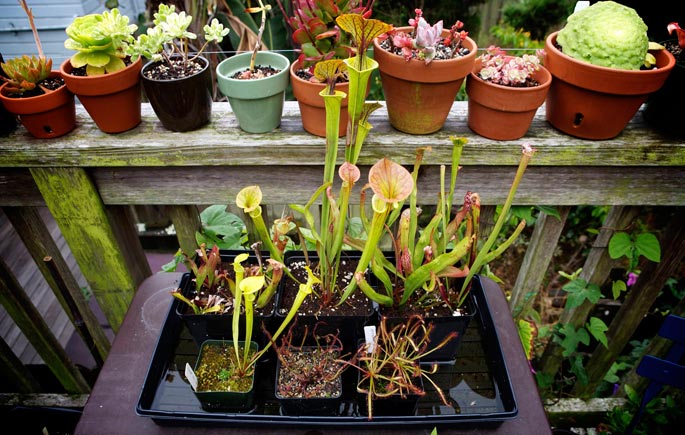 Tom was especially curious about my little bog of carnivorous plants (all of which were gifts from my buddy the SarraceniaDude. Thanks, Rob!). Our conversation went something like this.

Me: Did you know all of these plants eat bugs?

Me: Yes! See these guys with all the little sticky fingers? They’re sundews (Drosera). When a bug touches one, it gets stuck, and the leaf curls up and eats the bug.

Just then we see an actual bug – some kind of small beetle – walking around the base of the Drosera.

Me: See that bug? He knows what he’s doing. If he touches any of those sticky bits, he’ll get eaten.

By now our little lesson has attracted an audience. We’re all intently watching the bug as it navigates past the Drosera and toward the Sarracenia.

Me: Now he’s climbing up a pitcher plant. They eat bugs, too! Bugs fall in and they can’t get out and they get slowly digested.

Tom’s eyes go wide. Someone in back shouts out, “Like the Sarlacc pit!” My friends are dorks. Like me.

The bug reaches the top of a pitcher and slowly feels around the lip. For some reason, this makes me whisper.

Me, whispering: The pitchers are really slippery inside, and water collects in them, so if the bug falls in, that’s it – he’s dinner. See, these plants evolved in bogs where they couldn’t get nutrients from the soil, so they started eating bugs.

The beetle edges ever-closer to the edge and the party goes quiet. He puts one leg in, then another, then another, and then – fwip! – he’s disappeared inside the Sarracenia.

The crowd goes wild! All the time I’ve had this little bog going, I’ve never seen a bug get eaten. It was truly thrilling.

Tom’s Mom: Tom, Don’t you love all Derek’s plants? Which is your favorite?

Tom, pointing at the bog: Not that one. Because it eats bugs. And I like bugs.

This is an awesome story. Talk about in-the-moment, hands-on environmental education. Makes me think we should have a national INTERdependence Day. Much more appropriate than a simple “Earth Day” right….?!

The suspense, the drama, the cute little kid! Thanks for a wonderful story. You are a gifted writer!

Who says you can’t learn about nature living in a city? Feel free to teach Tom any time :)

I love the story! I can just see a group of people staring quietly at the bug going in the pitcher. Haha! When your Mom came out I thought she might ask you to take the poor bug out. That would have been funny!

Super cute story. When you got to the whispering part I actually leaned in closer to the screen… omfg I’m a dork.

When you said you started to whisper, I started reading you speaking in a David Attenborough kind of voice. Couldn’t help it…

← I Think I Impregnated My Phalaenopsis
I’m With Julie →