A Visit to Quarryhill Botanical Garden

In Excursions on 3 May 2013 tagged Acer, Botanical Garden, Cornus

In Glen Ellen, California, just an hour or two north of San Francisco, there’s a 25 acre plot of land. In the 1900s, it was mined for rock to build roads. In 1964, a fire burned it to the ground. A few years later, Jane Davenport Jansen saw something in the ruined land and bought it. And after countless seed collecting trips to Asia, it’s now the Quarryhill Botanical Garden, the one of the largest collections of Asian plants anywhere. And it’s a marvel.

Quarryhill sticks out in many ways. In the middle of wine country, you drive by miles of grape groves, tidy lines on the hillsides, before getting to this oasis of wild nature. Yet, the place is also unnatural, as all of the plants come from half a world away. Still, they thrive in the California sun. It was so bizarre to walk around the garden on a spring day so hot it felt like summer, but see none of the chaparral or succulents California is famous for. 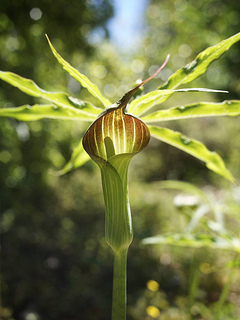 Instead, the place is overflowing with species grown from seeds collected across Asia. Japanese maples (Acer) were clearly a favorite, and our visit coincided with them all forming their propeller-shaped seeds. Dogwoods (Cornus) were in bloom. The grooves left from the mining have turned into streams and ponds, overflowing with Lotus flowers, the likes of which I hadn’t seen since my visit to Thailand. And bees were everywhere, doing their important work.

I was especially happy to spot an Asian Aroid, a rare treat to find outside in California. The flower at right is an Arisaema of some kind. Alas, I neglected to note the species name. (Any guesses, smart plant peeps?)

As Sonoma Magazine put it, Quarryhill is “a little piece of Eden.” If you’re anywhere near northern California, don’t miss it.

Wonderful day trip from the city! Beautiful and relaxing and a wonderful walk on the meandering paths. I love to visit all times of the year, when things are in bloom and when they are dormant. It’s a well kept secret that only a few people seem to know about!

I love your blog, and thank you for all the fantastic orchid wisdom. I just repotted a cheap grocery-store phal on advice I picked up from this blog, so fingers crossed it’ll re-bloom now. It already survived one of our chilly, dry Colorado winters without dropping buds, and it bloomed for five months straight, so hopefully it’ll remain happy. Also your potato bush saga is hilariously reminiscent of the ungodly struggle I had removing an overgrown, ugly, invasive forsythia bush, which was an incredible chore requiring large tools and words my mother would not approve of. Not only are those things huge, they also runner / sucker outward in rings from the branch tips AND regrow from any minuscule shard of root left behind, so they are the original maddening zombie plant if you don’t do the job properly. I wound up replacing the crater it left with a half ton of good planting mix, and planted roses instead. The roses are happy and so far I’ve seen only 2 small zombie forsythia which I unceremoniously yanked out; here’s hoping…