I love tomatoes. And I love San Francisco. But where I live and the veggies I love don’t always get along.

Every spring since I moved to my current home in the geographical center of the city, I have tried to grow tomatoes. And every year it’s been an utter failure. Sometimes the plants just died. Sometimes they made flowers that promptly fell off. Sometimes the plants fruited, but the fruit fell off before ripening. Sometimes, very occasionally, I got edible fruit, but only a few.

And every year I say, “This is the year that I’m not going to try again. I’m going to just admit that my climate isn’t right for tomatoes.” And then every year, at the last minute, I try one more time.

This is this year’s try. 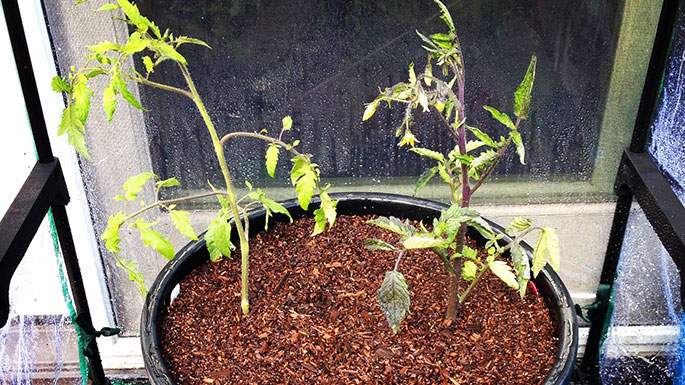 A couple weeks ago Heather and I were visiting Santa Barbara, which has a climate very similar to San Francisco: cool and coastal. We drove by fields of grape vines that were covered by plastic or vinyl covers. Not exactly greenhouses, more temporary ceilings. My guess is that the cool ocean air was too hard on the grapes. They needed more heat and less cold wind.

And that made me think of my own yard, where, if you picked just the right spot, there was enough sun for tomatoes, but we just don’t have the summer heat that tomatoes want. In fact, in my yard, the sunniest spot is also the most windy, and that wind is cold even in the summer. We live on a hill, there’s always wind.

So an idea was born: If I could cover the tomatoes in some sort of plastic contraption, it would raise the temperature enough to make tomatoes happy, with the added benefit of keeping the squirrels off them. (Aside to the squirrels: You’re welcome for the strawberries. I hope you enjoyed them.)

I purchased the “Mini Greenhouse” on Amazon. It’s just a set of shelves that comes with a clear plastic cover. I set it up outside, in the sunny spot, close to the house, and put a temperature gauge inside for a few days. Low and behold, it was much warmer inside than out.

It’s small, so I only felt comfortable putting two plants inside. So this year’s experiment rests on two really interesting hybrids (no pressure, guys): “Indigo Rose” and “Wild Stripes” from Love Apple Farms.

If things go as planned, the plants will grow up through the wire shelving, so the whole thing will become a big enclosed tomato cage. I just hope they don’t get taller than five feet. 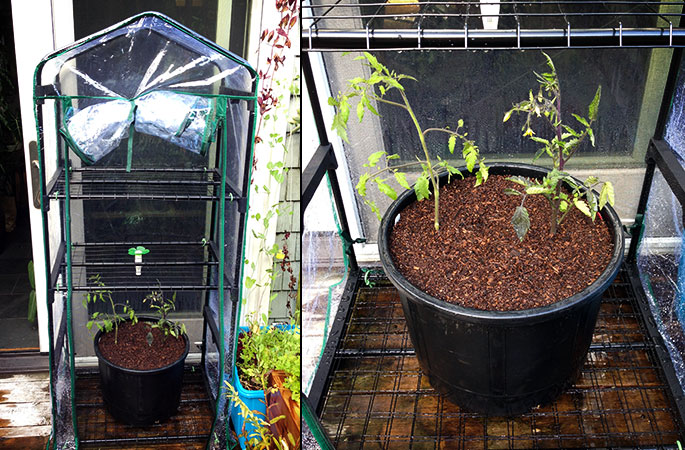 So this is my desperate measure to grow tomatoes in San Francisco: wrap them in plastic and hope for the best. I’ll let you know how it goes.

Letting them grown through the shelving is ingenious… built in tomato cage!