Deciduous plants are the ones that drop all their leaves once a year. In California, we don’t have too many of them. The word literally means “falling off at maturity.” And, in a way, that’s what I just did.

After 35 years in California, 20 in San Francisco, and 5 in our house, my wife and I decided to move to Oregon. There are reasons, lots of reasons, that I won’t get into here. Suffice to say, when we decided to go, we decided to go fast.

I had a lot of plants. Too many. And most of them could not come with us because we’d be moving around for a while. So I had to find homes for them. Fortunately, I’ve met a lot of awesome plant people in my San Francisco years. 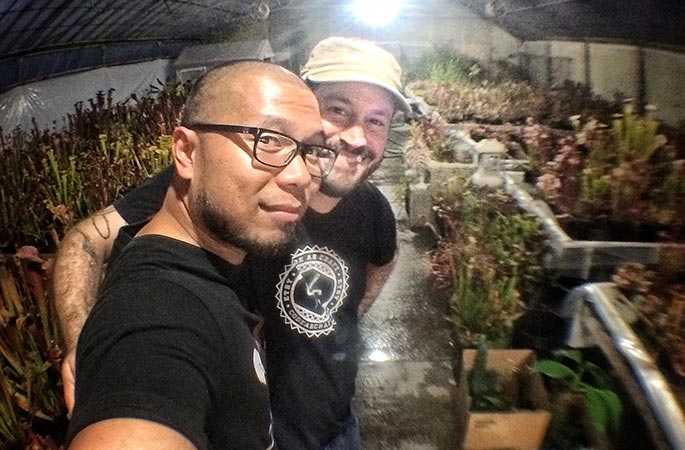 The orchids, carnivorous plants, and a few other jungle plants went into my friend Rob’s greenhouse. I know they’ll be happy there. Rob is the one who got me started on Sarracenia in the first place. (UPDATE: You can see some of them in this post.) 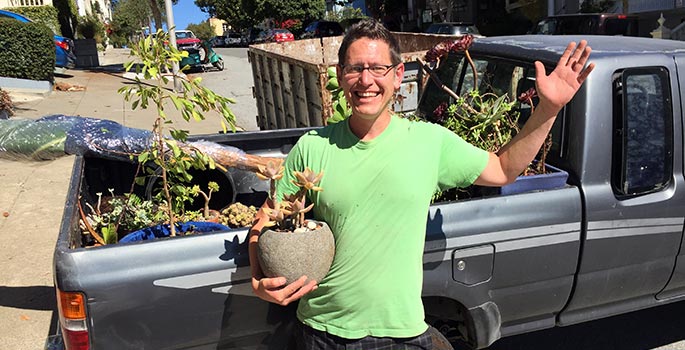 A bunch of outdoor succulents (some that they’d given me in the first place), as well as many great indoor plants (including two giant banana trees), went to Megan and Matti, who inspired me to get creative with succulents. 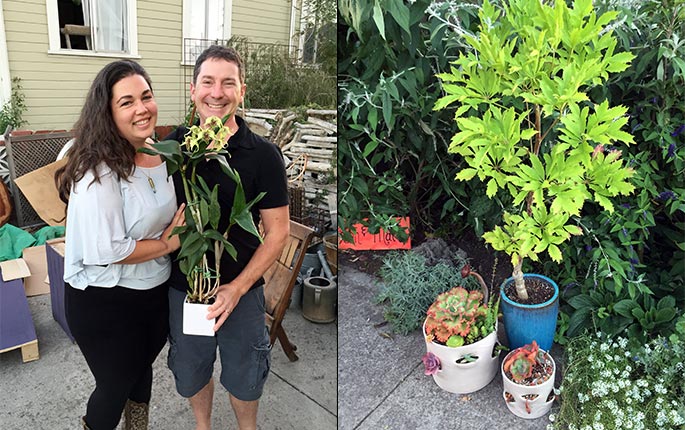 Two of my very favorite succulent planters, as well as one of my favorite orchids (in bloom), went to Jenn and Matt, who just got married, so I could pretend they were wedding gifts. Of course, one of the succulents was given to me by Jenn originally.

And I was so happy to gift my Woolly Pockets to Gem (who I neglected to photograph with them), my fellow Conservatory volunteer, and a constant encourager in all my botanical adventures.

And the rest? Well. All change requires some sacrifice. 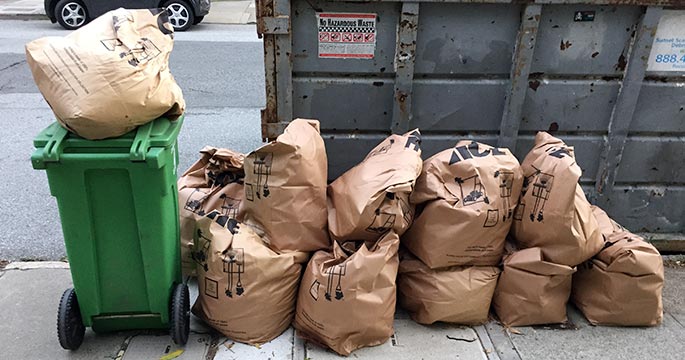 Dismantling my garden was one of the saddest things I’ve ever had to do. I took many breaks to cry in the back yard. These plants were like my children. But if gardening has taught me anything, it’s that life is about change. And for every plant that dies, more sprout up to take its place.

I put down a lot of roots in San Francisco, metaphorical and actual. It makes me so happy to know that I still have roots there, being tended by some of my dearest friends. 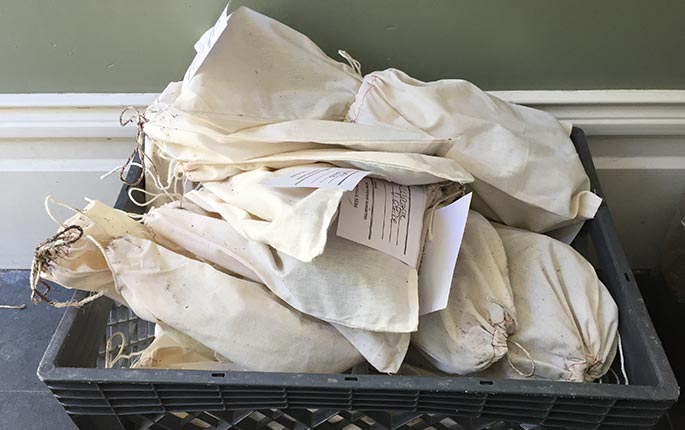 Naturally, I couldn’t let all the plants go. The bulbs, tubers, and rhizomes got bagged, labeled, and put in a box labeled “Ark.” I’m hoping they have a nice, comfy dormancy and bounce back once we have a new home. 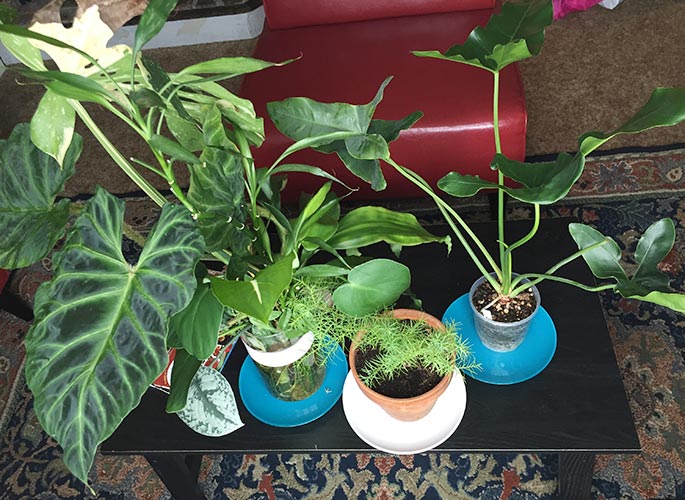 And, of course, I had to take a few. I brought a jar of cuttings from various houseplants, a single pine tree I started from a cutting from my favorite tree in Buena Vista Park, and a Philodendron I grew from a seed. Like me, they are all far from home, looking forward to putting down new roots.

Wow, a BIG change. We recently moved from a house where we’d lived for 33 years. But only a couple miles north–and we got a much bigger garden out of the deal. I brought a lot of plants with me–with help of many of the local garden Bloggers, Danger Garden, Mulch Maid, Amy Champion, Ricki Grady, Girl with Hammer–and others. It was hard to leave so many plants behind, and we’d have rescued more if we’d realized everything was coming for lawn & bark dust. It almost seems harder the way you had to do it.

Glad you’re getting to bring some with you. Portland is such a great gardening town. And we have deciduous plants aplenty. You’ll be in terrific company.

I really loved this post. I love that you have these plant connections — I never thought of that before. Generosity of spirit! But I guess we all do remember when someone gives us a cutting or when we lucked in to some happenstance plant rescue. Best of luck to you and Heather and your animal/plant menagerie. Oregon just lucked out.

Welcome to Oregon, Derek. You should find many plant lovers here. I’ve lived here all my life and while we definitely have a winter season, it isn’t too cold. Just wet.

Welcome welcome, it will be fun to meet you. I too lived in SF for a time in my life, I think you will find Portland has a lot to offer. Please look all of us PDX bloggers up when you’re in town and settled, we’ll take you to a few plant shin-digs! Cheerss!

Wow, that was traumatic just to read it. I got a lump in my chest just thinking about having to leave my rooted babies behind. I do know for a fact, though, that gardening in Oregon will make you question why you didn’t come a long time ago. Born and raised here, I dug in my first tiny plot at 19, and have been playing in the dirt ever since. Thirteen years in our current house. It’s an amazing place to grow. In all senses of the word. Welcome home.

Omg! ORE! And there’s Matti and Rob and Jenn! I’m going to miss running into you two in SF, we’ll have to make a PNW plan. Happy travels!

Derek I can sympathize with you in entirety. I myself am parting with my plant collection to move to PA. I think the worst part are the memories tied to each plant in a cherished collection. The Bulbophyllum you got on your first fathers day, the Agave you picked up on a vacation to Las Vegas and countless others all tell a tale in your mind. I wish you the best of luck in your move and may there be plenty of new chlorophyll stained memories in your future.